An extreme bout with ulcerative colitis recently kept Brian (my husband) house hostage for two weeks. We were about a month in with autoimmune Paleo and to my surprise, when I came home from work one day I see a familiar looking jar on the kitchen counter. It was a beautiful jar of bacon grease. 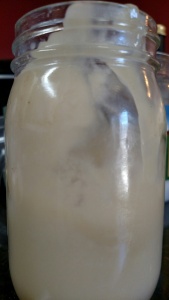 All my grannies saved bacon grease (drippings). They were repeating what their mothers did as they were growing up. Back then, you didn’t waste anything. Today, people would say it’s frugal or “old school.” Some would even say it’s unhealthy. Twenty years ago, I would have said it was unhealthy too.

That’s right. Twenty years ago I was on the vegetable oil band wagon with everyone else. Everything you read said animal fats were horribly unhealthy. Fast forward to the 2000 era, more than 90% of vegetable oil is genetically modified (GMO). What does this mean? It means that the seeds of the plant grown for vegetable oil have been modified in a laboratory; which is far from natural.

Sorry but I’ll pass on the GMO stuff. Give me real food. Real food is healthy. Besides being healthier than plants that are genetically modified, bacon grease tastes wonderful. Just because it’s a saturated fat doesn’t make it bad for you. Just consume in moderation.

Should you decide to try bacon drippings, just fry your bacon as usual and using a wire mesh strainer, pour the drippings through the strainer into a clean jar. Some people keep their jar on the counter, others feel better about keeping it in the refrigerator. Once you start using it, don’t be surprised if you suddenly get creative with it. It’s that good.

Who knew we practiced Paleo before Paleo?